Electricity capacity costs are one of the charges that appear on your electricity bill, but do you actually know what that charge entails? Unfortunately, many people don’t and that can lead to bills that are higher than they need to be. In fact, capacity often represents between 15 and 30 percent of a company’s electricity charges. In this article we’ll help you understand what these charges are, how they are developed, and how to manage the associated costs.

So how do capacity charges work? Capacity charges are the cost of ensuring that the electric grid maintains reliability on days of highest demand. For example, when you need to cool your building, other businesses on the same transmission grid will also need similar levels of electricity. On the hottest days of the year, electricity demand is typically the highest. Your utility company measures your usage on these days and applies a capacity tag that reflects that usage. The higher the usage, the more you will pay in capacity costs.

Capacity tags can be managed proactively to help reduce the associated costs. Below we will discuss capacity costs in detail.

What Are Electricity Capacity Charges?

What is a capacity demand charge? Electricity capacity charges are the rates that users pay to secure a sufficient supply of energy on a power grid during peak hours of electrical consumption.

A capacity charge basically serves as insurance against power outages, which sometimes occur in times of high demand. The charges are based on peak hour usage costs, as established during a given year’s usage cycle. The price determined by one year’s usage figures is used to determine the following year’s capacity charges.

Electricity capacity charges are among the most important costs for businesses to manage. To cut down on costs and increase your bottom line, it is crucial to know your capacity costs and identify ways to bring them down. That way, your company can have more money to allocate to other expenses.

Capacity costs are relatively easy to identify because they are based on usage on peak demand days. If you can find out which days are most likely to witness peak usage levels, you can lighten your usage on those days and potentially reduce your capacity tag (and associated costs).

Capacity ensures that the electricity grid is always reliable, even on peak usage days.

To supply communities with sufficient amounts of energy all year round, electricity suppliers have a concept known as the capacity market. By this design, multiple resources of energy are established in each locale to ensure all homes and buildings are supplied, without fail, throughout each of the four seasons. Even during the hottest summer days when electricity usage is peaking, the capacity market helps keeps electricity flowing. If one supply source becomes tapped to the limit, other nearby sources will handle the balance of businesses and residences in need of electricity.

The capacity market allows grid managers to fund generating capacity in areas of high need. Without this capacity, populated areas could be at risk of brownouts and possibly blackouts during times when electricity usage volumes are at their peak. A heat wave, for example, will inevitably force many residents and building owners to lean heavily on their cooling systems. If the majority of users on a transmission grid are powering their cooling systems simultaneously, the grid could abruptly shut off under stress, as was common in earlier decades. Thanks to the capacity market, though, brownouts and blackouts are much rarer occurrences today.

Granted, the capacity market only really exists to cover these peak hours of usage during a given year. The user costs, as based on one year’s peak usage, are simply spread out throughout the following year. For users, the capacity market serves as a form of protection against brownouts, which can result in tremendous damage and loss in many instances.

How Are Capacity Charges Calculated?

Capacity, as a component of the overall utility distribution cost, is figured separately from the cost of pure energy.

The capacity costs for a user’s account include two main components:

These components are multiplied to figure out the kW capacity costs in a given year and then divided by the yearly kilowatt hour (kWh) usage to determine the kWh cost.

The capacity year begins anew on the 1st of each June. This is when utility and customer inputs are updated for the new year and capacity tags are determined. Capacity tags are based on the peak usage of the prior year. If you use excess volumes of energy during the five hours of peak consumption, you will pay higher capacity the following year. If you do not consume as much energy during the five peak hours, you will not see any increase and could have a lower capacity tag instead, which means better pricing.

Under some contracts, the supplier can pass on additional charges to the consumer if the capacity tag increases. However, this rarely happens unless the increase is major.

The local utility gives the user’s peak-load contribution to the supplier.

Each month, the provider bills the customer. On each bill, a charge is added to cover the capacity, which is based on the local clearing price. Once the bill is paid, the provider sends those funds to an independent system operator (ISO), which pays for the generator. Alternately the funds might be sent to a regional transmission organization (RTO).

In the northeastern United States, installed capacity is determined as follows:

Once established, the peak hour becomes the new installed capacity, effective on the following year’s billing cycle. In New England, the RTO is ISO-NE, which is linked to the New York Independent System Operator (NYISO).

In 13 states across the Midwest and mid-Atlantic, peak load contributions are determined as follows:

RTOs publish this figure for each planning year.

Suppliers make it possible for businesses and residents to receive electricity from the nearby generators. It all works as follows:

This process keeps electrical supplies generating around the clock, throughout each year.

Each of the seven regional grids in the continental U.S. use a different set of metrics to determine capacity prices. Each method is designed to guarantee a return on investment for the transmission organizations that supply grids with electricity capacity for peak demand hours.

In New England, the Forward Capacity Market (FCM) has been established to draw investments into new and existing resources. The FCM is overseen by the ISO-NE, which explores the possibility of changes in the market. Market changes can be brought on by power-plant shutdowns and other events that affect the availability of energy across transmission grids.

The FCM determines capacity for electricity across the grid, working three years ahead of the game. At the same time, the FCM imports resources, compensates suppliers and goes after anyone that fails to provide sufficient capacity during power-outage events.

In New York, bilateral transactions and auctions dictate capacity prices. During each period, the NYISO puts out a figure that indicates the numerous requirements that impact pricing for a given time frame. Capacity prices in the state are based on a monthly dollar-per-kilowatt amount. Prices differ depending on the volume of capacity generation bid for the market.

Many other eastern states use the Pennsylvania-New Jersey-Maryland Interconnection (PJM) instead of the FCM. Though only three states are in the name, PJM provides power to many different states, including all or parts of Delaware, Illinois, Indiana, Kentucky, Maryland, Michigan, New Jersey, North Carolina, Ohio, Pennsylvania, Tennessee, Virginia, West Virginia, and the District of Columbia.

PJM ensures reliable electricity for the more than 65 million people in its transmission grid by overseeing a competitive wholesale electricity market. It also oversees long-term regional planning that strives to identify and implement useful, cost-effective improvements in order to provide dependable, economical electrical power throughout the system. Like the FCM, PJM plans a couple of years in advance to project future capacities, taking into account electricity use fluctuations, plant retirements, and public policy changes that may affect demand.

How to Manage and Reduce Electricity Demand Charges

Year after year, usage volumes during peak hours determine capacity and transmission rates. As part of an effort to bring costs down, businesses can dial back their usage. Some businesses participate in programs where notifications are sent out a day in advance of an expected peak hour. Users who lower their electricity consumption during the time in question can reduce their capacity tag for the subsequent year.

Users can also bring down their electricity consumption during peak hours by upgrading their means of energy efficiency. In various markets, suppliers now offer programs that allow users to boost their energy efficiency with motor upgrades that bring down usage volumes. This way, the systems for lighting, heating, and cooling in a building use lower amounts of energy.

If you run a commercial business, explore ways to lower energy usage during business hours. Consider the following options: 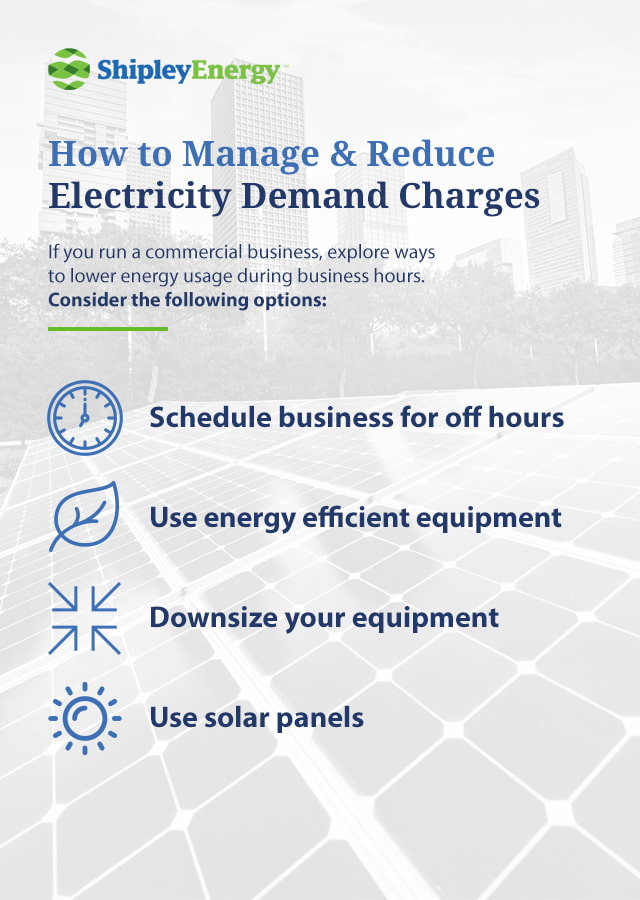 You can also bring your company’s capacity costs down by exploring different electricity services. Thanks to deregulation, the energy sector is more competitive now than ever. Today, there are numerous suppliers that are specially tailored to the unique needs of smaller and mid-sized businesses. With so many services to choose from, you can easily find a supplier that offers lower cost services.

Depending on your industry, costs associated with electricity can make up a large portion of your company’s budget. Fortunately, there are ways you can reduce the costs associated with manufacturing, heating, air conditioning, lighting, and other functions that draw from your power supply.

At Shipley Energy, we provide electricity to businesses to deregulated states. Whether you run a small or large company, we can help you build a customized energy procurement plan that fits your needs and helps you achieve your goals.

Shipley Energy has been in business for 90 years. Throughout the decades, we have been a leader in electricity services and innovation for local businesses. Companies across the private sector come to us for premium service at reasonable rates. Our account managers have helped business owners find ways to reduce electricity costs through capacity tag management, smart procurement, and improved efficiency. Contact Shipley Energy to learn more about our commercial electricity services.