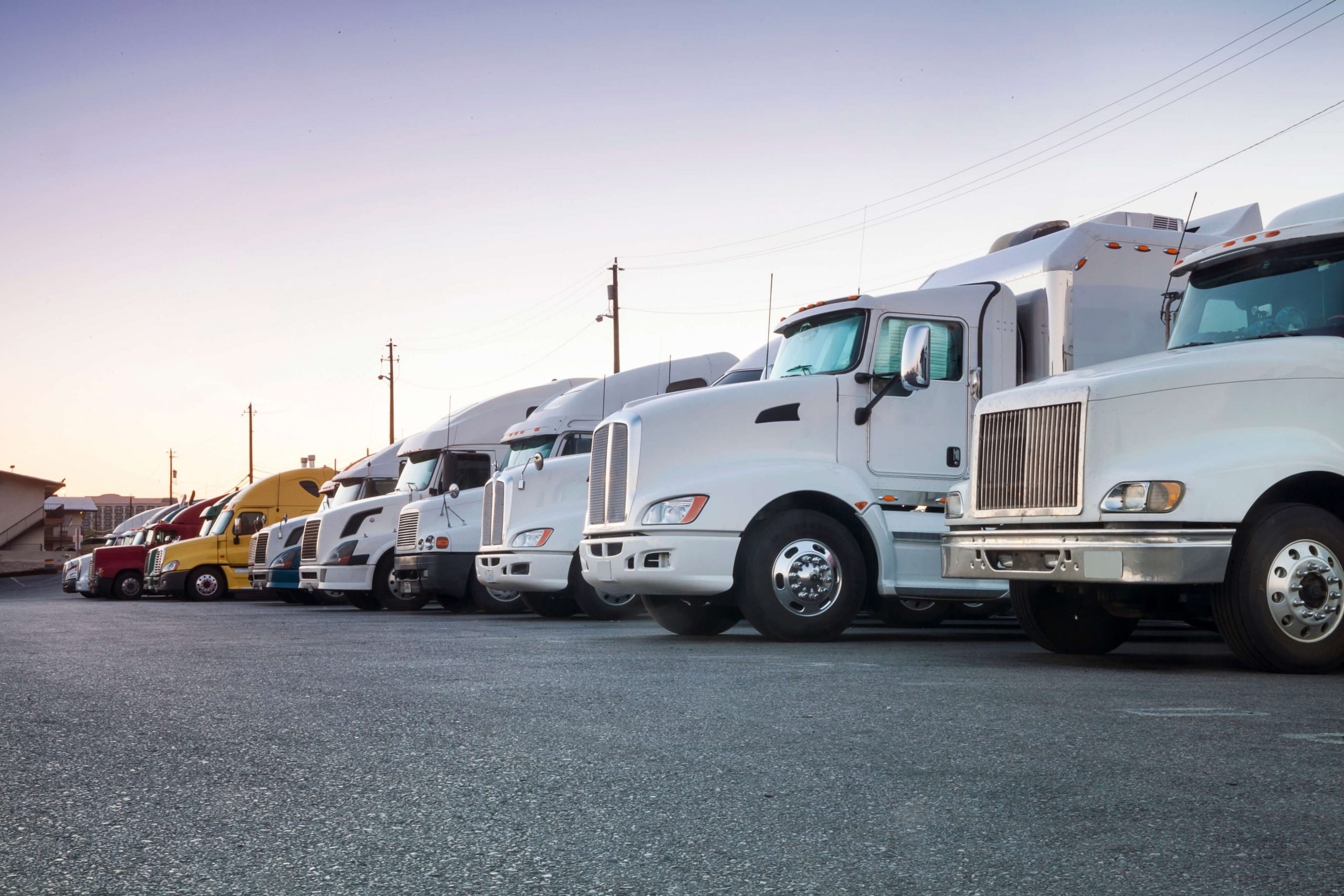 If you run a business that relies on a commercial fleet of vehicles to literally drive profits to your bottom line, keeping an eye on fuel costs is vital. Fleet efficiency can have direct benefits to your pocketbook.

The days when you had to rely on regular diesel fuel are long gone. Today, there are many diesel fuel alternatives for trucks, vans, and service cars, regardless of their being put in light-, medium-, or heavy-duty use. Fuel systems in commercial vehicles can run on different types of alternative fuel or power including biofuel, electricity, propane, natural gas, and more.

Characteristically, fleet vehicles see a lot of use. They’re driven as much as seven times more than average passenger vehicles. That means that commercial fleet fueling needs are really important. Reducing fueling costs can improve corporate profitability, while at the same time reduce emissions of greenhouse gases. Using alternative fuels offers one way to become more cost efficient and also, in many cases, reduce maintenance expenses as well.

Here’s a look at several of the common alternatives for commercial fleet fuel services that you can consider.

If you run a business that relies on a commercial fleet of vehicles to literally drive profits to your bottom line, keeping an eye on fuel costs is vital. Fleet efficiency can have direct benefits to your pocketbook.

The days when you had to rely on regular diesel fuel are long gone. Today, there are many diesel fuel alternatives for trucks, vans, and service cars, regardless of their being put in light-, medium-, or heavy-duty use. Fuel systems in commercial vehicles can run on different types of alternative fuel or power including biofuel, electricity, propane, natural gas, and more.

Characteristically, fleet vehicles see a lot of use. They’re driven as much as seven times more than average passenger vehicles. That means that commercial fleet fueling needs are really important. Reducing fueling costs can improve corporate profitability, while at the same time reduce emissions of greenhouse gases. Using alternative fuels offers one way to become more cost efficient and also, in many cases, reduce maintenance expenses as well.

Here’s a look at several of the common alternatives for commercial fleet fuel services that you can consider.

Biodiesel is made from vegetable oil, cooking oil, animal fats, and other sources. You need about 100 pounds of oil or fat combined with a catalyst and about 10 pounds of short-chain alcohols (such as methanol) to create 100 pounds of biodiesel.

B20 is the most common blend. It offers good cold-weather performance, and an energy output per gallon that’s often indistinguishable from gasoline. B100 produces about 8 percent less energy per gallon than petroleum diesel, so the B20 blend – which has 80 percent petroleum diesel – has very little reduction in energy.

Biodiesel fuel is used to power light duty and heavy duty vehicles.  It’s blended in existing diesel pumps and tanks. That means there’s no incremental cost. That said, the per-gallon cost for biodiesel ranges from about 3 to 40 cents more for B20 as compared to wholesale fuel prices for regular diesel, and from 50 cents to a dollar more per gallon for B100.  However, using biodiesel fuels may qualify you for fuel use credits under the Energy Policy Act of 1992, which seeks to reduce America’s dependence on imported petroleum and improve air quality.

Two types of natural gas can be used to power vehicles. The first is compressed natural gas (CNG) and the other is liquefied natural gas (LNG). Each has specific characteristics and advantages.

As the name suggests, compressed natural gas is created when natural gas is compressed to less than 1 percent of its original volume at standard atmospheric pressure. It’s stored in pressurized tanks and can power light and heavy duty vehicles and it offers similar fuel efficiency, power, and acceleration as regular gasoline.

Liquefied natural gas is created by purifying natural gas and then cooling it to -260 degrees Fahrenheit so that it turns into a liquid. The need to keep it cold and stored in vacuum-insulated pressure containers limits some of its utility. It’s most often used for medium- or heavy-duty vehicles.

One of the nice things about natural gas is that 80 percent to 90 percent is produced in the USA. It’s brought out of the ground from gas and oil wells. The USA has a vast pipeline network for transporting natural gas throughout the country, and particularly east of the Rocky Mountains.

There are costs associated with converting a regular gasoline engine into one powered by natural gas. Those costs are about $3000 for a small passenger vehicle and over $60,000 for a transit bus. Those costs can be overcome by the savings in fuel cost: Overall, the cost is about 10 percent to 25 percent less than wholesale gasoline.

Business owners need to be aware, if applicable, that there’s a cost for the infrastructure required for refueling a fleet of CNG/LNG vehicles. That cost is typically under $100,000 for small or medium-sized fleets, and can exceed $250,000 for a large fleet.

Electric and hybrid cars are becoming much more common on our roadways. It’s no longer unusual to see an all-electric Tesla or Nissan Leaf, or a hybrid such as a Toyota Prius or Honda Insight on the freeway in the neighboring lane.

Electric vehicles are suitable for planned communities, shuttles, and other mass transit options. For example, at Stanford University, you’ll find 100 percent electric transit buses in use every day. These buses can run all day, with a range of over 125 miles, and can recharge overnight. 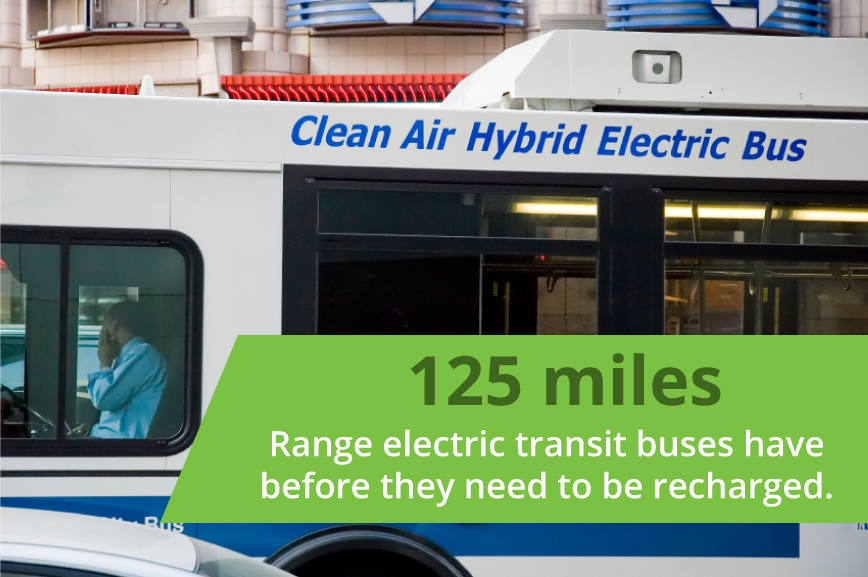 Emissions in electric vehicles are close to zero, and are very favorable in hybrids as compared to traditional diesel-powered vehicles. Costs vary widely as small cars are under $20,000 and large electric buses can run more than $450,000. The costs can be recouped over time, however, as shown in a case study that follows.

Another consideration is that hybrid cars are heavier than their regular counterparts. Depending on the type of application, this might be an issue. One thing’s for sure: Eventually the battery in an electric or hybrid vehicle will need to be replaced. As fleet vehicles are usually run for a long service time, it’s quite likely that this will be something you need to factor into your cost-benefit equation.

Finally, keep in mind that cold weather affects battery life (negatively). So if you’re vehicles are going to be transiting in a Winter Wonderland, you’ll need to estimate the effective range of the vehicle in those conditions so that you don’t have “range anxiety.”

Ethanol is made from corn and other plant-based materials. As a fuel for vehicles, it’s available as E-85, which is a blend of ethanol and gasoline. The blend ranges between 51 percent to 83 percent ethanol, depending on where you are buying it and the time of year. E-85 is a “flex fuel” and can be used by cars so marked.

One way to make ethanol is called dry milling. In this process, the entire kernel of corn or other grain is ground down into flour. That’s then mixed with water and enzymes to convert the “mash” to a simple sugar. Ammonia is then added and the mixture is process is cooked to lower bacteria levels prior to fermentation.

Fermenting the mash takes between 40 and 50 hours. It takes that much time for the ethanol to form. It’s then concentrated and comes out eventually at 190 to 200 proof. As an aside, some gasoline is often added to this mix rendering it undrinkable; otherwise, it would be subject to a beverage alcohol tax!

Many current passenger cars can run on E-85, including several made by Ford, Chevy, Chrysler, and GM. There are more than 2400 fueling stations that offer E-85, most of these being concentrated in the Midwest.

Liquefied petroleum gas (LPG), also known as propane, has an extensive history of powering motor vehicles. LPG gets stored in pressurized tanks. When it is released under reduced pressure the liquid vaporizes. The resulting gas is then combusted for power.

Propane is a by-product of processing natural gas and crude oil. It’s transported by pipeline, rail, or truck on land, and by ship too.

Propane offers a high octane rating, sometimes in excess of 110. Remember, the higher the octane number, the more compression a fuel can withstand before igniting. Propane, therefore, can be very useful in passenger vans and medium-duty trucks. Heavy-duty vehicles can also benefit from propane fuel.

Facts are great, but it’s always helpful to think about things in the context of a few case studies. Here are three: The first involves electric vehicles, while the others involve municipalities that have recently converted fleets to alternative fuels, such as CNG and biodiesel. 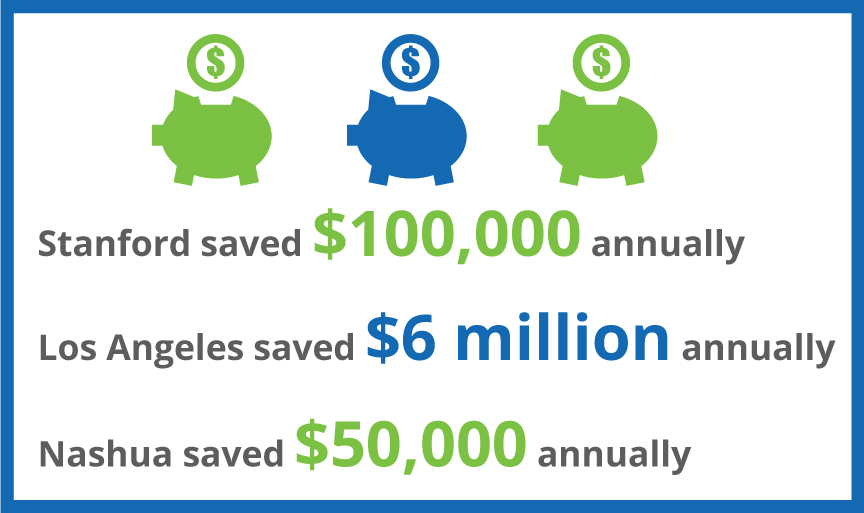 Focusing first on electric vehicles, let’s return to the example of Stanford University and their electric buses. Three electric buses are in service. The decision to put these vehicles in operation was based in part on cost estimates that were very favorable.

Based on estimated fuel cost at $4 per gallon for diesel, the annual savings for the three 100 percent electric buses as compared to choosing hybrid electric was more than $53,000. It gets even better when comparing to a straight diesel bus. Then the savings exceed $100,000 annually.

Adding to that, the buses are pollution free and quiet, projecting the image that the university wants. Maintenance is easier, with 30 percent fewer moving parts, and the electric buses are much more efficient in terms of miles per gallon equivalent (MPGe). Electric buses get more than 20 MPGe, as compared with a typical diesel transit bus that gets about 3 MPG.

The Los Angeles Public Works department has converted its fleet of 700 diesel-powered solid waste disposal vehicles to run on CNG and LNG. Nearly 80 percent of the feet is now running on alternative fuels, with the goal being to get to 100 percent. Currently, the city is saving more than $6 million annually on fuel.

The city has committed to clean fuels and now has six refueling stations in place. This is important because the Public Works department has to be ready to go into operation after any earthquake to clear roads for first responders. Having the requisite infrastructure to make that happen is critically important.

CNG is now being used in Nashua’s street sweepers, refuse trucks, and other heavy duty vehicles. About 40 vehicles are using alternative fuels. Nashua’s transit buses run almost exclusively on B20 biodiesel, but there’s now one CNG bus too. The city is saving about $50,000 annually, and maintenance costs on the vehicles are lower than prior to 2011, when the vehicles relied on traditional fuels.

Finding the right fuel solutions for your commercial fleet can be a significant challenge. You have to consider fuel management issues for each vehicle in your fleet, individually and collectively. Assessing the efficiency of alternative fleet fuel is critical to making the proper judgment about which alternative fuels are right for your needs.

Shipley Energy is a recognized industry leader in helping business owners like you improve fleet efficiency. We offer a free consultation for fleet managers to assess your current and projected situations and help your fleet fueling systems become more efficient. From construction and transportation, we can help!

Shipley Energy also offers bulk fuel delivery, which can save you time and money as well as improve the amount of time your fleet is on the road!

Shipley Energy is the largest locally owned provider of natural gas, electricity, propane, and other fuels. We know everything that you need to know to get your fleet running efficiency on alternative fuels for the future. We also offer fleet fueling services. You can contact us by email or call us toll free at (855) 564-3050. We also offer 24/7 emergency service, so you know you can always count on us.