Like the majority of homeowners, you strive to keep your monthly bills as low as possible. In certain areas of home service, rates and terms are fairly straight forward. For example, the flat rate associated with monthly internet service is easy to understand. Your water bill is based on what you use. Yet, matters can become confusing when you deal with electricity, especially if you aren’t familiar with the emerging retail energy market.

Longtime homeowners have mostly relied on utility companies for electricity. In recent years, a new market has come about in select parts of the country. This marketplace gives homeowners more options regarding where they buy their energy. In the areas where these policies have been implemented, customers now have more choices in terms of energy providers. To understand these options and find the best energy plan for your home, you need to know the difference between energy suppliers and utilities.

What Is a Utility Company?

Utility companies facilitate the distribution and transmission of electricity. Depending on the laws of a given territory, utility companies may provide the exclusive means for electrical power. These same companies are responsible for the power lines that send electrical energy to the homes and businesses throughout each area of coverage. As of 2017, there were nearly 3,000 utility companies operating in the U.S.

The energy that these utilities distribute is sourced from power plants, where generators create electricity. From there, the electricity goes to substations, where it is converted into energy through transformers. High-voltage electricity is then sent across distances via power lines, which allow the flow of power to businesses and residential properties. At the receiving end, the energy is transformed into lower voltages to be used in numerous ways, such as when you power on your lights or activate your stereo.

Utility companies are responsible for the maintenance and stability of the power lines that they own and control within their respective areas of coverage. In the event of a thunderstorm, hurricane, or other interruption of electric service, the utility in the affected area would be responsible for the repair of lines and the restoration of service for impacted homes and businesses.

Electric utilities also read and tally the distribution of electricity to each customer through an electric meter. Based on these readings, they bill customers for wattage used monthly.

What Is an Energy Supplier?

Energy suppliers serve as an alternative source of electricity supply and work with the utility company to send power to customers along the utility’s network of power lines. In a deregulated market, energy providers can own their own power plants. This stands in contrast to regulated markets, where only utility companies can own power plants. In the deregulated scenario, one will generally find a more competitive list of options in terms of pricing. 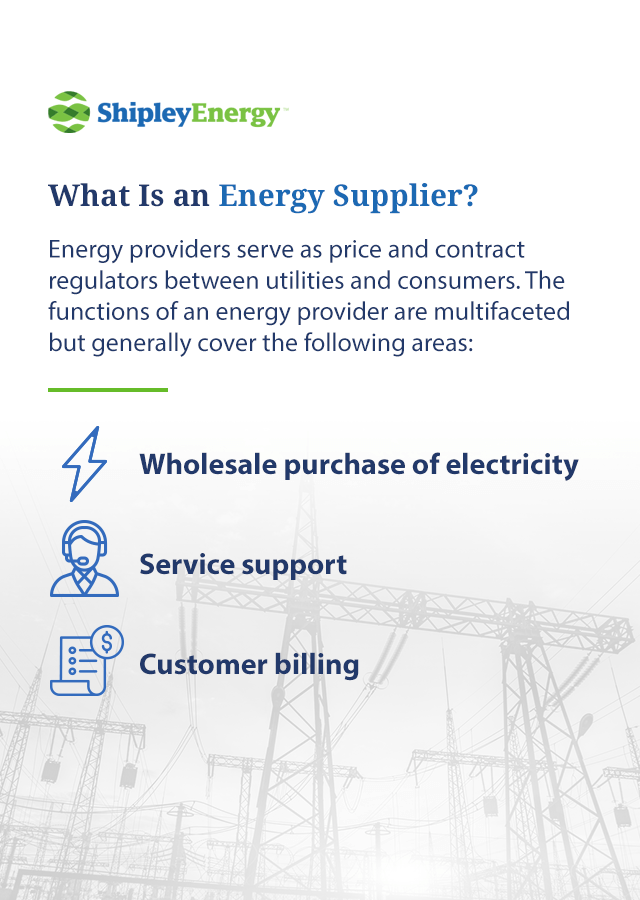 Electricity suppliers give consumers more flexibility than most utilities. Depending on the size, dimensions, and location of your property, you might find a deal that would be better tailored to your needs as a consumer through an electricity supplier. Utility companies will generally offer the same rates and plans to everyone with little flexibility.

Granted, not all states have opened the door to competition with the utilities, and few states have completely deregulated. To know whether the option is available in your area, check to see how laws currently stand in your state.

The Difference Between Utilities and Providers

Utility companies and energy providers represent two models of the energy sector. While they both offer customers electricity, there is a difference between electricity providers and utilities in the way they deal with the public. With providers, you can find a more personalized set of service plans that suit your needs as a customer. Providers entered the market to compete for customers with deals that were never before available on the energy front. Utilities never had the incentive to offer such deals because they dominated the market in a time when customers had no other options.

As with all of life’s essentials, it is important to have a range of options when it comes to the energy that lights, heats, and powers your home. In any given ZIP code, you should have several different energy providers from which to choose. Without this breadth of options, your energy choices would be controlled by one or two companies, and you would have little bargaining power in the situation.

With an energy provider vs. a utility company, you could secure a relatively low rate for the customers in your area. Compared to the price that you might otherwise pay for electricity directly from a utility, this saving could add up to hundreds over a year. If you own a large property, the savings could be even more significant.

The purpose of electricity providers is to form a competitive market that removes the monopoly that utility companies once had over the energy sector. By purchasing energy wholesale, the providers can pass those savings onto consumers in the form of lower rates.

In addition to the widened options presented by energy providers, the deregulatory laws that opened this market have also paved the way for environmentally friendly alternatives to standard sources of energy. Through electricity providers, you can find deals on green energy.

When you switch to a plan that draws on renewable sources, you can do your part to lower the carbon footprint of your community. Green energy is cleaner burning and more efficient than the older forms of energy that draw from fossil fuels.

Electricity providers can also provide you with greater pricing stability, regardless of the volatility in the energy market. When you negotiate a contract with an electricity supplier, you can lock in the same rate for the duration of the plan. Even if energy prices spike due to unforeseen events in the market, you will be billed at the same rate as the day you entered the contract.

Deregulation is characterized by the eradication of regulatory laws that impose governmental oversight on sectors of the economy. During the late 1800s, regulation was viewed as a necessary practice to prevent customer abuse and monopolization in commercial industries.

By the 1970s, this outlook changed as economists and politicians started to view regulation as an impediment to business. The counter view was that a deregulated market would open the doors to competition and incentivize businesses to compete for customers with better deals and prices. One market that has undergone a radical overhaul since the advent of deregulation is the energy sector.

Deregulation in the energy market began in the early 1990s when lawmakers passed bills to expand the sector and allow private companies to enter the picture. With the Energy Policy Act of 1992, Congress removed the obstacles that once prevented competition in the wholesale electricity sector. The bill was designed to promote energy conservation and incentivize clean air alternatives. However, the law has not been implemented in all states.

The states and territories where electricity has been deregulated are:

Deregulation has been especially advantageous for customers in states like Pennsylvania, where rates have gone up on homes and businesses, making it essential for people to have choices on where to turn for service. Due to these changes, more than 2 million residents of the state have switched from utilities to energy suppliers. A lot of people also change suppliers when they find competitors that offer lower rates. A simple search can reveal which rates are most affordable in your part of the state.

The advent of deregulation has opened the door to alternative forms of fuel and energy. In some of the areas where deregulatory policies have gone into effect, customers now have the option to use natural gas for their heating and cooking needs. As a fuel that is mostly resourced domestically, natural gas makes it possible for the U.S. to decrease its reliance on foreign oil and its shifting prices.

How to Switch Energy Suppliers

How much would you spend each month on electricity in an ideal scenario? If your current rates exceed that amount, it could be time to search for a better deal from an electricity supplier that serves your area. Before your search, determine how much you pay during a typical month for electricity and then add up all your monthly energy costs over the past year.

If your electrical costs over the prior year have cost a disproportionate amount of income, you definitely should look for better offers. Also make a list of your main points of energy usage and see which of those could be reduced with a slight change of habits. In any case, try to determine just how low you could comfortably conserve energy and then check to see whether there are offers available in your area that would be more advantageous than your lowest possible rates with your current utility.

It is important to know about the energy options in your area and whether you live in a deregulated market. If you enter your ZIP code into an online search site for energy rates, you can quickly retrieve the deals available in your area. If your market is deregulated, you will generally find a more competitive list of rates. Electricity providers will often offer low introductory rates to gain new customers.

If you are looking for an energy provider in Pennsylvania or Maryland, check out the rates from Shipley Energy. For the past nine decades, we’ve been one of the area’s leading provider of energy services for homes and businesses. Whether your home is large, small or medium-sized, we have the right deal to suit your energy needs.

As one of the basic necessities in life, energy is something that you should be able to fit conveniently into your budget. Check supplier rates online and contact Shipley Energy to learn more about how you can save by switching energy providers.

Make The Switch To Shipley Energy