Natural gas is a clean, efficient, and reliable way to heat homes and power essential appliances. But have you ever wondered what it is, where it comes from, and how it gets to you?

If you have, we’re here to give you the answers. In the guide below, we’ll discuss where natural gas is found, how natural gas is made, and how it is converted into energy. We’ll also describe some common natural gas uses in the home.

What Is Natural Gas?

Natural gas is a source of energy that lies beneath the earth’s surface. Though natural gas contains many different substances, one of its primary components is methane (CH4), which has one atom of carbon surrounded by four atoms of hydrogen. Natural gas is tasteless, colorless, and odorless — what we think of as its characteristic smell is a commercial addition to help warn people of gas leaks.

Natural gas contains hydrocarbon gas liquids (HGLs) such as propane, butane, and ethane. These HGLs would be gaseous at atmospheric pressure, but they condense into liquid form at extreme pressures such as those found deep beneath the earth’s surface, or in pressurized containers. Natural gas also contains nonhydrocarbon gases like water vapor and carbon dioxide.

Where Does Natural Gas Come From?

But the natural gas did not always remain exactly where it had formed — it shifted to new locations. Today, we give different types of natural gas different names depending on the formations in which we find them.

Some of the natural gas moved underground toward the naturally occuring cracks between layers of the surrounding rock. Natural gas found in these cracks and cavities is known as conventional natural gas.

3. Other Types of Natural Gas

In some cases, natural gas formed alongside underground deposits of crude oil. Some of these deposits lie deep underground, and some lie far beneath the ocean floor. In either case, this kind of natural gas is known as associated natural gas because it is found in association with crude oil.

Natural gas is usually extracted in one of two ways:

How Is Natural Gas Processed and Refined?

Natural gas typically goes through a few different processing and refining steps before it gets to homes. 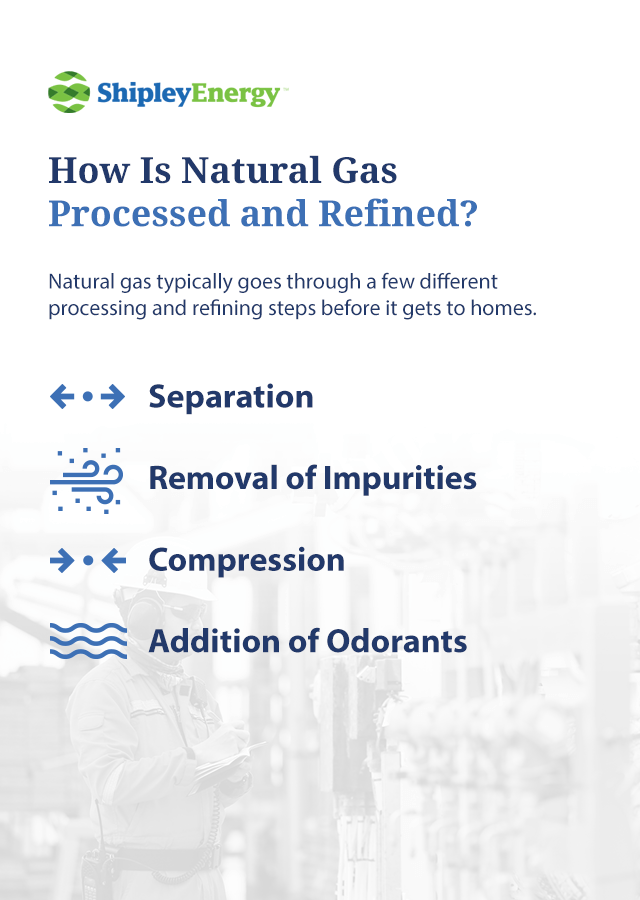 When natural gas comes out of the pipeline, it first undergoes separation. This process removes oil and water from the gas. Often, for safety or operational reasons, the gas is then vented and flared — venting releases a small amount of gas into the atmosphere, and flaring combusts gases that would otherwise pose safety hazards. From there, the gas goes to a gas processing center for further refining.

How is natural gas refined? The natural gas that initially comes out of the pipeline is known as wet natural gas because it contains NGLs like ethane, propane, and butane, as well as some water vapor. It also contains other compounds like carbon dioxide, sulfur, nitrogen, and helium. Processing plants must remove most of these compounds — they often sell them separately for other uses.

Once the impurities are gone, the natural gas is known as dry or consumer-grade natural gas. It is then vented and flared once again for safety and sent out along the next pipeline.

Natural gas is odorless when it comes out of the wellhead. But an odorless combustible gas is too dangerous for consumers to use — a gas leak might go undetected and lead to serious explosions and fires. So when the natural gas reaches a gate station — a local receiving station that receives gas from several different pipelines and lowers its pressure for distribution — the gate station typically adds odorants to give the gas an unpalatable smell.

How Does Natural Gas Get to My House?

Once the natural gas is processed and refined and has flowed through the pipeline to a gate station or distribution facility, it is ready for use. But how does it get from there into consumer homes? Here are the various channels it flows through:

How Is Natural Gas Converted Into Energy in Homes?

How does natural gas work in a home? Once natural gas enters your home, it still exists in a compressed gaseous state. It becomes usable energy only when ignited. When you turn on a gas appliance, the pressure of the gas is slightly higher than air pressure, so it flows out of the burner. It then ignites in a predictable blue flame, either with discrete electric spark ignition or through a continuously burning pilot light.

What Is Natural Gas Used for in Homes?

Natural gas supplies about 24% of residential energy in the United States, but how is natural gas used in homes?

One of the top uses of natural gas in your home is the heating system, which usually accounts for the most significant share of home energy use. Natural gas heating systems make excellent choices because they are dependable, comfortable, and efficient — the minimum efficiency standard is 78% percent, but some models achieve 90% efficiency.

One of the other main uses of natural gas in your home is cooking appliances. Gas ranges are popular with chefs because of the consistent heating, superior temperature control, and instantaneous on and off functions they offer. Homeowners can gain these benefits in their kitchens as well. Gas stoves that use spark ignition rather than a pilot light can also help homeowners save nearly a third on energy costs.

Natural gas commonly supplies the energy needed to power dryers. Natural gas dryers are reliable and efficient, and they tend to produce less static cling, wrinkling, and shrinking than other dryer models. Many natural gas dryers can sense moisture and heat levels and shut off automatically, helping reduce energy consumption.

Natural gas also commonly supplies the energy needed to power a home’s water heater. After the central heating system, the water heater is typically the biggest consumer of energy in the home. On average, a gas water heater is more economical to operate than an electric water heater, and it heats water twice as fast.

Curling up by a cozy fire is one of the best parts of winter, but the work of cutting and stacking firewood, along with building, tending, and putting out a fire, can seem like a chore. That’s why many households invest in gas fireplaces — even tiny apartments without traditional chimneys. Gas fireplaces are convenient, affordable, and efficient ways to create a warm, cozy fire on freezing winter days.

Partner With Shipley Energy for All Your Natural Gas Needs

To learn more about our residential natural gas or to switch suppliers, contact Shipley Energy. Throughout the Northeast, customers trust Shipley Energy for our dependable service, value, and years of experience that help us find the best energy solutions for each household’s needs. And if you’re looking to switch to natural gas, we can install the equipment you’ll need for your supply.