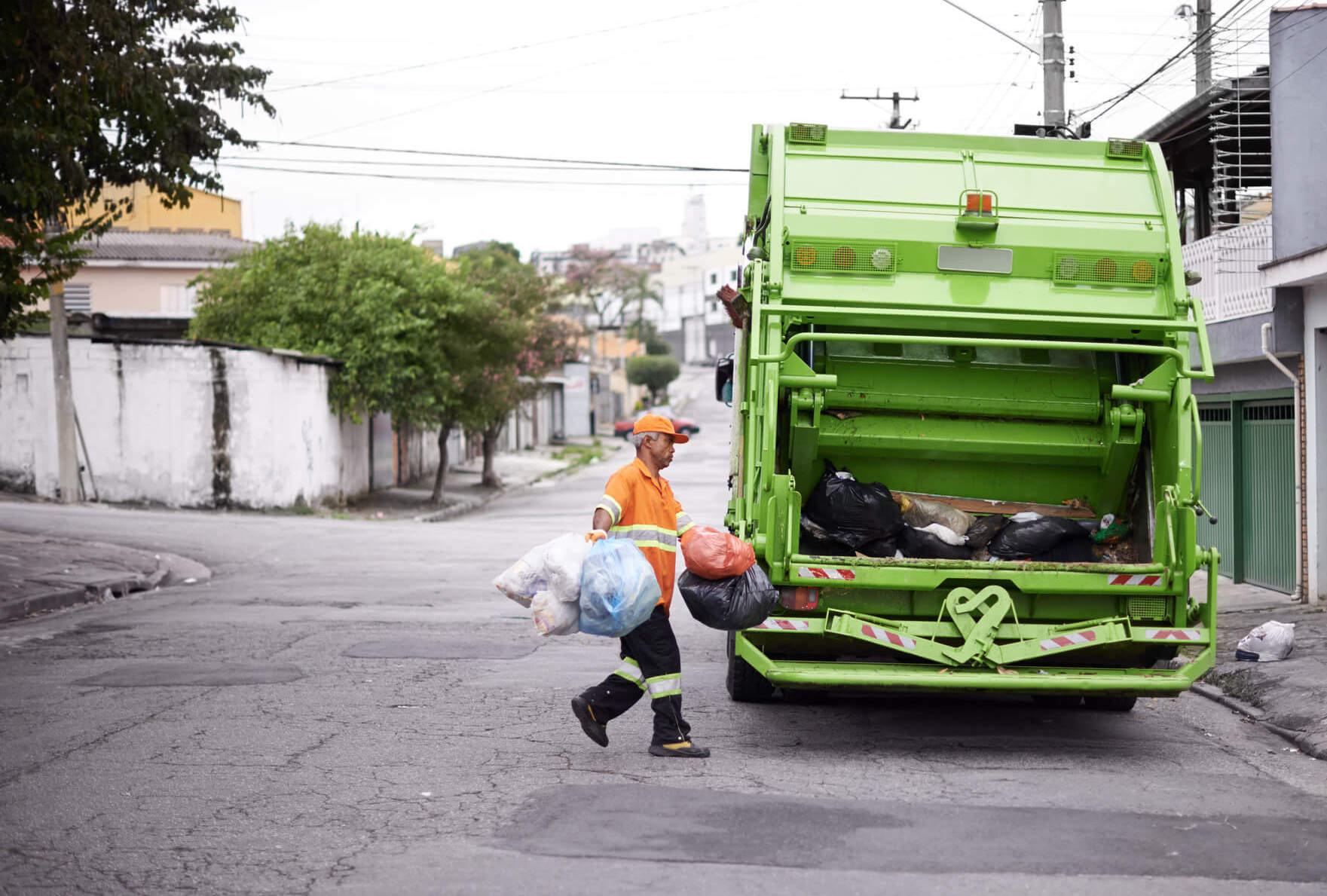 Check out these benefits of switching your waste management fleet to natural gas. Click on a link in the outline below to jump to that section in the content.

Check out these benefits of switching your waste management fleet to natural gas. Click on a link in the outline below to jump to that section in the content.

Waste management is one of the most vital services for communities throughout the U.S., but it does not come without a cost. In a time when fuel costs have rendered leisurely driving cost-prohibitive, fuel costs in the public-services sector can be problematic for refuse fleets and taxpaying residents of local communities. Environmental issues that have cast traditional fuel options in an unfavorable light have compounded these problems.

Thankfully, refuse fleets now have an alternative to conventional fuels like diesel. Compressed natural gas is better for the environment, easier on engines and more readily available at modest prices throughout the U.S. Many state agencies have recognized the benefits of natural gas, and some of them have begun offering incentives to fleet owners who agree to switch from diesel to natural gas.

Despite these advantages, many fleet managers have thus far resisted the switch, in some cases due to the upfront cost of trucks that run on natural gas. The following article explores the benefits of natural gas garbage trucks and why it is in the best interest of refuse fleets to make the switch.

Why Are Refuse Truck Fleets Switching to Natural Gas?

All across the United States, garbage trucks rely on diesel and biodiesel fuel to drive around from neighborhood to neighborhood and collect waste and recyclables. The emissions these trucks produce contribute to the air quality problems residents experience in some of the nation’s more heavily trafficked towns and cities.

Overall, garbage trucks consume about 1.2 billion gallons of diesel annually. As a result of this reliance on diesel by the refuse-trucking industry, the U.S. emits approximately 27 billion pounds of CO2 greenhouse gas, solely for garbage collection. These figures could easily be lower if more garbage trucking companies consider alternatives.

The problems associated with diesel fuel and its widespread use among garbage fleets have spurred interest in natural gas fuels, which are less expensive and release fewer emissions. As more garbage trucks begin using natural gas fuels, towns and cities could enjoy cleaner air because the exhaust pipes of refuse vehicles would be emitting fewer gases.

LNG is the less accessible option for refuse fleets because it is costlier to procure and not as readily available across the U.S. Consequently, refuse fleets would face challenges trying to enact LNG adoption on a broad scale, both in terms of storage and fueling. Therefore, CNG has become the diesel alternative of choice among the refuse-trucking industry.

Garbage trucks, in general, have suffered from lackluster fuel efficiency, a problem the rising costs of diesel fuel have compounded in recent years. In general, garbage trucks burn through a gallon of diesel fuel every three miles. When you multiply this by the per-gallon price of diesel — which hovers around $4 — it becomes apparent why refuse fleets are burning at both ends.

Compared to diesel, one of the key advantages of compressed natural gas is the latter’s relatively low cost. Unlike diesel, which has remained relatively costly, CNG has come down in price, thanks in part to a competitive, deregulated domestic market that has made the fueling alternative more readily available to refuse fleets. The increased presence of shale gas resources has also spurred this trend, making CNG the more practical option in an era of expensive diesel and gasoline.

The biggest impediment to widespread adoption of natural gas has been the cost factor in setting up fueling stations that offer CNG. Thankfully, refuse fleets can get around this problem by hiring third-party suppliers. A fleet company could get its on-site fuel tank filled by an outbound CNG supplier regularly, thereby preventing the need for local service stations.

The other major roadblock is the cost of natural gas vehicles (NGVs), which cost upwards of $30,000 to $50,000 more than fleet trucks that run on diesel. Despite this, the savings fleets can accumulate over time can easily earn back the upfront cost of trucks that run on natural gas. NGVs are also kinder to our environment because the high-pressure fuel systems of such trucks emit fewer gases.

The Advantages of Switching to CNG

Refuse fleets can save money and reduce their carbon footprint by switching from diesel to compressed natural gas. With CNG, fleets emit less and spend less on fuel costs. Thanks to the domestic availability of CNG, the trend is also beneficial to the U.S. economy. Moreover, natural gas is cleaner and more efficient and thus a healthier option for refuse vehicles. There are several advantages to natural gas garbage trucks, which we’ll explore in more detail below. 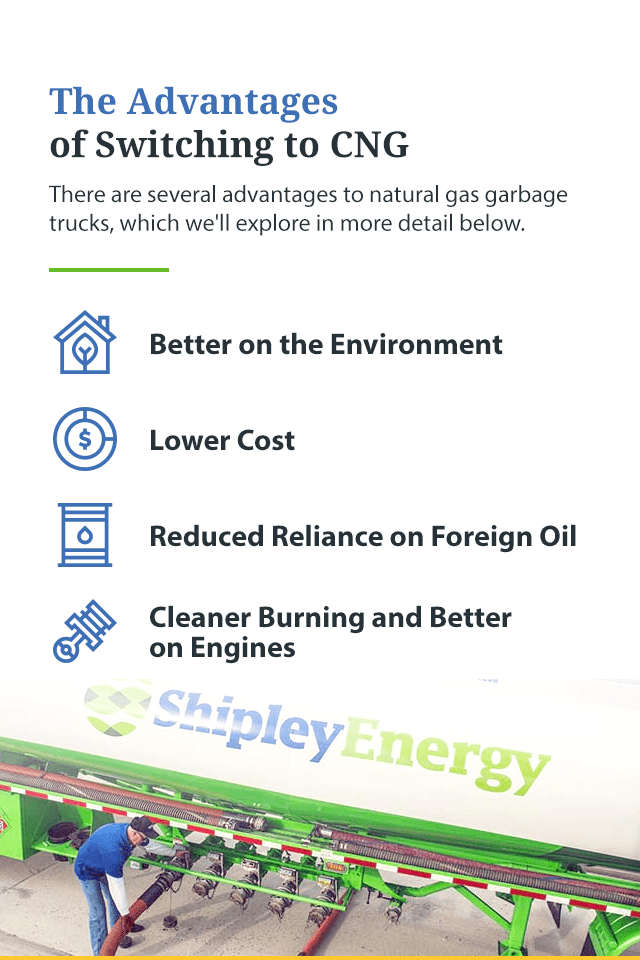 1. Better on the Environment

One of the most significant benefits of NGVs and CNG is the low amount of emissions natural gas releases compared to diesel. From an environmental standpoint, refuse fleets benefit in the following ways by switching to CNG.

In the decades to come, history may come to view natural gas-powered refuse trucks as a major catalyst in the move away from gas-emitting vehicles.

Garbage truck fleet fueling is less expensive with natural gas. Compared to competing forms of fuel, CNG costs an average of $1.50 to $2 less per gallon. When you multiply that savings for each vehicle in a fleet over the course of a given year, the savings that accumulate with CNG could be immensely rewarding for refuse fleets. From a savings standpoint, the lower costs associated with CNG work in the following ways.

Even with the initial cost of switching a garbage truck fleet to natural gas, companies could easily recoup the up-front price of the vehicles within a year, after taking all the potential savings into account.

The move toward CNG is slowly loosening America’s reliance on foreign oil, due to the ample domestic supply of natural gas, which has become more readily available over the past two decades thanks to deregulation and increased competition. As more U.S. suppliers offer natural gas, fleet companies and other entities in the public-services sector stand to reap the following benefits.

The trend of refuse trucks switching to natural gas is one of many moves that could help make the U.S. a more self-sufficient country in the future.

4. Cleaner Burning and Better on Engines

For the same reason compressed natural gas is healthier for the environment, the fuel is also better for vehicles. CNG is a cleaner-burning fuel than diesel. CNG leaves fewer trace elements in vehicle engines, thus reducing the need for maintenance. You can get more mileage on a tank of natural gas and operate a truck for a longer span with little or no need for engine repairs or parts replacements. As such, companies can earn the upfront cost of CNG garbage trucks back in due time, thanks to the relative lack of performance issues they are likely to encounter over the course of a typical year.

How to Switch Your Garbage Truck Fleet to Natural Gas

Over time, switching your garbage truck fleet to natural gas could present numerous benefits. Initially, however, the upfront costs can make the undertaking somewhat daunting, especially if you operate a small fleet. The best way to go about the switch is to look for incentive opportunities and find CNG suppliers that offer good deals to fleets in your area.

Knowing the benefits of natural gas-powered refuse trucks, some states offer grants and other funding opportunities to encourage more fleets to make the switch. California, Florida and Texas have all enacted programs that give fleets financial incentives to purchase natural gas vehicles. Other states are offering incentives to encourage developers to construct natural gas fuel facilities. The discovery of natural gas reserves in the U.S. has spurred the latter move, a development that is freeing North America from its longstanding dependency on foreign oil.

Fleets can also switch to natural gas by seeking local suppliers that offer good deals and offers. For example, Shipley Energy offers fuel storage tanks for lease. Smaller fleets could use this opportunity to acclimate to CNG and then invest the resulting savings in CNG garbage trucks.

The U.S. is currently home to more than 900 natural gas stations. Still, the spread of compressed natural gas has remained relatively unknown among many fleets that continue to operate on old-fashioned fuel. Despite the higher price of CNG engines, trucks that ride on this alternative fueling option are easier and less costly to operate and maintain over the long run. CNG refuse trucks burn fuel more slowly and cleanly, resulting in fewer emissions and a reduced likelihood of engine problems. CNG is also a more reasonably priced fuel alternative, thanks to an abundance of domestic sources.

Shipley Energy has joined the CNG movement by adding by CNG powered trucks to our own fleet. If you’ve already made the switch, visit our CNG station to refuel your fleet.

For refuse fleets in Pennsylvania, Shipley Energy has been a pioneer in CNG services. Contact Shipley Energy to learn more about our commercial natural gas and on-site tank fueling services.